By the Hong Kong market close on Monday, shares of Meituan soared 11.56% while Tencent gained 2.81%.

“Even if you look now, where we see very significant and sharp falls so that valuations now are at much more reasonable levels, I think it’s still quite difficult for investors … to really build the courage to go back in at these levels,” Mark Konyn, group chief investment officer at AIA, told CNBC’s “Squawk Box Asia” on Monday.

The broader Asia-Pacific markets struggled for direction on Monday.

Data released over the weekend showed Chinese industrial profits grew in the first two months of the year. Profits at China’s industrial firms rose 5.0% for the January to February period as compared with a year earlier, according to data released Sunday.

Investors have been watching for clues on policy easing from Chinese authorities amid concerns over the outlook for the economic powerhouse as it grapples with issues such as its worst Covid outbreak since the initial height of the pandemic in early 2020. On Monday, China’s biggest city Shanghai began a two-stage lockdown.

Oil prices declined in the afternoon of Asia trading hours, with international benchmark Brent crude futures down 3.32% to $116.65 per barrel. U.S. crude futures slipped 3.71% to $109.68 per barrel.

The U.S. dollar index, which tracks the greenback against a basket of its peers, was at 99.296 following a recent climb from below 98.7.

The Japanese yen traded at 123.88 per dollar, weaker than levels below 120 seen against the greenback last week. The Australian dollar was at $0.753, having risen from below $0.74 last week. 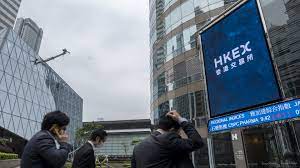